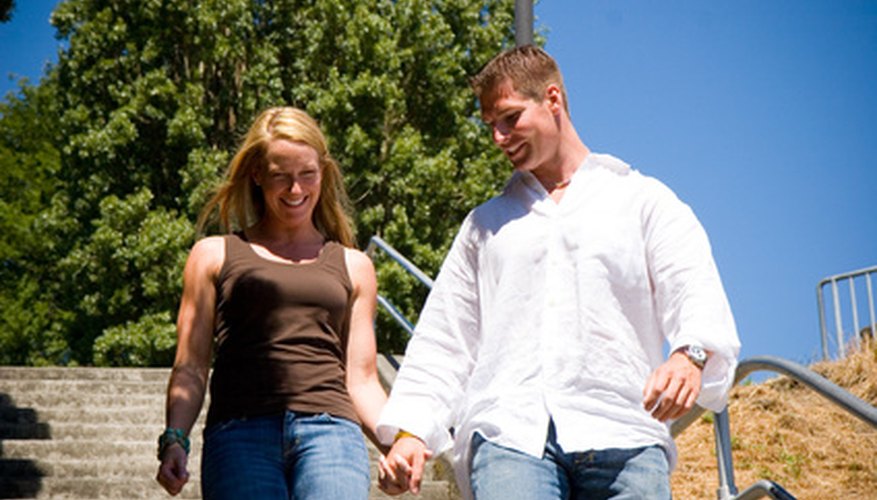 Holding hands is an acceptable display of affection between Christian couples.

When Christians go out on dates, they keep a clear distinction between friendly and romantic relationships. Due to religious restrictions, Christians must maintain platonic boundaries even when dating. Guidelines for Christian dating and friendship should be determined by biblical principles, and other Christian believers should hold each other accountable when relationships exist between males and females.

Generally in serious Christian relationships, a date should not occur if the couple are not friends. But, if it is set up by outside parties or is a blind date, romance should not be the first course of action for the couple, but friendship. A successful romantic relationship is the result of sincere friends who enjoy each other's company.

Christians should let their relational guidelines be determined by biblical principles. If an activity seems incompatible with what the Bible says is appropriate, couples should avoid the activity. For example, the Bible says to "avoid every appearance of evil," so a male and female should not spend time alone in a room with a closed door if they intend to appear pure.

Make sure your dates take place out in public. You don't have to be in a group, but you shouldn't be alone with your date if you intend to respect each other's Christian principles. Restaurant dates are an excellent option, but a dark movie theater may be too tempting. Try a wholesome activity like exploring a museum or art gallery, something that offers sufficient lighting.

One of the best ways to ease tension and get to know members of the opposite sex is by hanging out with groups of friends. Whether it's a house party or Christian concert, being around people you're comfortable with will help loosen you up, so you can talk to someone to whom you are attracted. Plus, it will keep you accountable before other Christian brothers and sisters.

The major issue in opposite-sex relationships is sexuality. Christians believe in waiting until marriage before having sex, and this should be established in a dating relationship early on. Couples should talk about what they allow themselves to do, be that kissing, holding hands or anything less. Temptation is normal, but not being able to withstand temptation is a problem. As long as a couple respects each other sexually, it's a good sign of a successful Christian relationship.

Arlen Hershey has been writing science curriculum for informal science education organizations since 2006. She has written for Experiencia and Sea World. She has a bachelor's degree in biology from the University of Illinois.