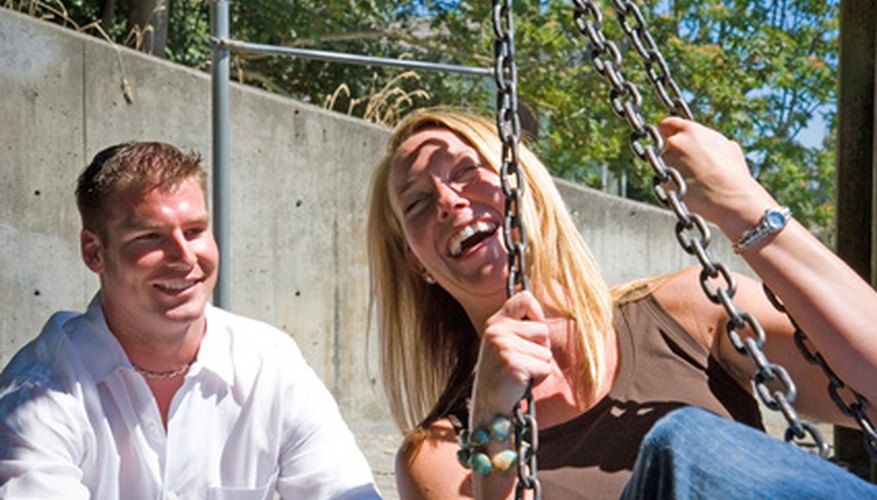 Courtship allows couples to know one another better before deciding on marriage.

Modern dating and courtship stem from the same historical roots. Both can serve as a way for people to attract a suitable marriage partner. However, each word implies something slightly different, and while one almost always leads to marriage, that is not necessarily the case with the other.

According to Encyclopedia Britannica, societies that don't practice arranged marriage allow people to date to find marriage partners. It's a ritual that leads to courtship and eventually to marriage, if it's successful.

According to the Vertical Thought website, dating emerged from the traditions of arranged marriages and courtship. While people in modern times associate marriage with romantic love, that was not always the case. According to MSNBC.com, couples married for practical reasons. In colonial times, for example, people owned and worked farms, the upkeep of which required the manpower of the whole family, including the children. During these times, people found spouses through courtship, whose sole aim was marriage to produce children. Couples met regularly, but under the supervision of their families. “Unsupervised” dating didn't exist. However, as couples began marrying for love, dating and courtship evolved. Dating became another step on the road to marriage, happening just before the courtship phase.

The Argument Against Dating

Dating has gotten some backlash in religious circles. According to an article appearing on the Leadership U website, the replacement of courtship with dating is the seed of many of society's ills. The article maintains that problems like the high divorce rate could be reduced by returning to the practice of courtship. The article states that dating represents a time in which people are focused on themselves and in which they participate in physical/emotional intimacy without a concern for commitment. This can make the relationship unstable because once the relationship doesn't provide the instant gratification it once did, the people go their separate ways. This casual approach to a relationship doesn't allow the couple to get to know one another and to develop their communication skills, something that counselors recommend for lasting marriages.

However, traditional courtship as espoused by its modern proponents has its drawbacks, according to the Got Questions website. While the goal of courtship is to develop a friendship with a prospective marriage partner, couples in these situations often find it difficult to get to know one another. People tend to be on their best behavior around their families—the chaperones in the traditional courtship. They sometimes become different people when alone with one another. Additionally, dating relationships don't always end as the Leadership U article argues; they often result in courtship and marriage.

Marriage has evolved to meet the demands of its modern participants. While some may wish to return to the days of chaperoned courtship, the desire that all people in modern society will revert back to these practices probably isn't realistic. Additionally, according to the Mayo Clinic, modern couples have other tools like premarital counseling to assist them on the road to marriage. This helps them to solidify communication skills and to get to know one another—one of the functions courtship previously fulfilled.

Buffy Naillon has worked in the media industry since 1999, contributing to Germany's "Der Spiegel" magazine and various websites. She received a bachelor's degree in German from Boise State University. Naillon also attended New York University and participated in the foreign exchange program at Germany's Saarland University. She is completing her master's degree in educational technology at Boise State.