Ideas About Gender Equality in the Romantic Era 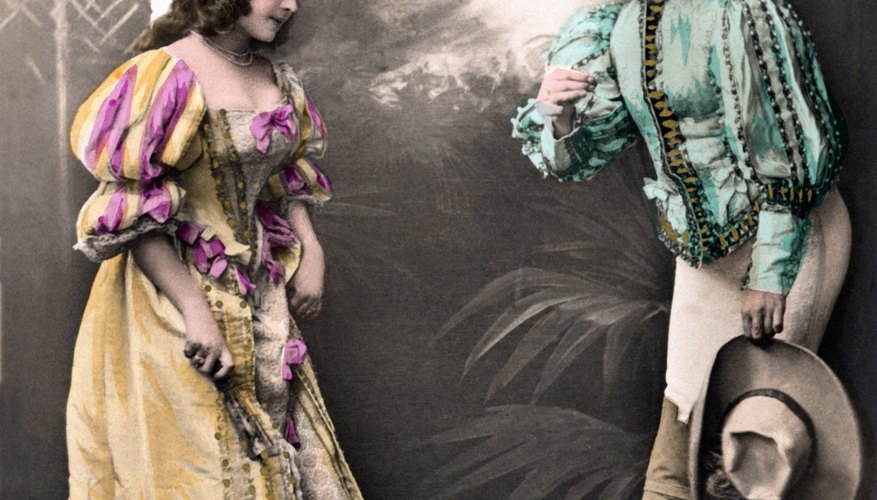 Traditional gender roles were much more prevalent in the Romantic Era than they are today.

The 20th century's latter half saw the rise of women leaving the home in increasingly greater numbers to work and pay for their way in the world, establishing financial independence for themselves and fighting for equal pay, work and rights in government. Although complete gender equality continues to elude the modern world, the substantial gains over time are significant. During the Romantic Era, which began in Europe during the 18th century, the position of women was subordinate to that of men.

Romanticism -- a creative and philosophical movement of the late 18th and early-to-mid 19th centuries that succeeded Enlightenment -- grew in response to the Industrial Revolution that ran parallel to it. The History Guide writes, "Romantic ideas (arose) both as implicit and explicit criticisms of 18th century Enlightenment thought." Essentially, Romanticists felt that Enlightenment philosophy reduced man to "a soulless, thinking machine," and urged free expression of emotion and creativity. The History Guide states, "instead of the motto, 'Sapere aude,' (or 'Dare to know') the Romantics took up the battle cry, 'Dare to be!'"

Society Before the Romantic Era

Prior to the Industrial Revolution and Romantic Era, the western world's agrarian-Christian family model relegated women of every class to the home, the kitchen and birthing beds. In colonial and post-Revolutionary America, as well as in pre-Industrial Europe, women's chief role was as breeders, supplying a continual level of population renewal as well as feeding, clothing and instilling dominant social values into their children before sending them out in fields to work, maintain and expand the agrarian society's frontiers.

When the Industrial Revolution began, agrarian jobs were drying up around the western world. Although large portions of America were unexplored, most settled areas of Europe and North America had been carved up and parceled out for farming; generations born into the last few years of the 1700s found that farmland was becoming increasingly hard to find. Advancements in metallurgy and machinery gave rise to the first factories, and many unemployed men left their family farms to seek work in the big cities of Western Europe in the new factories. Women soon followed; some young women sought factory work before meeting men, marrying and starting families of their own, while other women took jobs as servers for middle-class business families.

Women in the Work Place

As women entered the work place, inequality in social positions of men and women began to shift. As women began to be recognized for their working abilities and were paid for their work, their bargaining rights collectively emerged, with women arguing for equal pay (compared to men). In addition, women working in modern factories and as servants in middle-class homes were frequently educated with rudimentary reading and math skills so that they could do their work; as more women learned how to read and write, the number of female writers and artists rose.

Ending of an Era

By the end of the Romantic Era -- the mid-1800s -- the position of women in society had greatly changed. Previously regarded only for their ability to bear and raise children, women throughout the Romantic Era and the Industrial Revolution began to be valued for their ability to work, both inside and outside a home setting, as both factory workers and service industry workers. Although within the home, women's rights were still curtailed -- and, upon marrying, were almost immediately surrendered to their husbands -- women outside the home were able to assert their rights to equal pay and equal work for the first time. A few decades after the end of the Romantic Era, women would earn the right to vote in many parts of the western world, with more rights being earned in the 20th century.

Shannon Reynolds has been writing regularly since 1999, and received her first editing job for "Perceptions" magazine in 2008. She holds a Bachelor of Arts in creative writing and literature from Southwest Minnesota State University. She currently attends Antioch University where she'll earn her Master of Fine Arts in poetry.