What Is a Greek Lavalier? 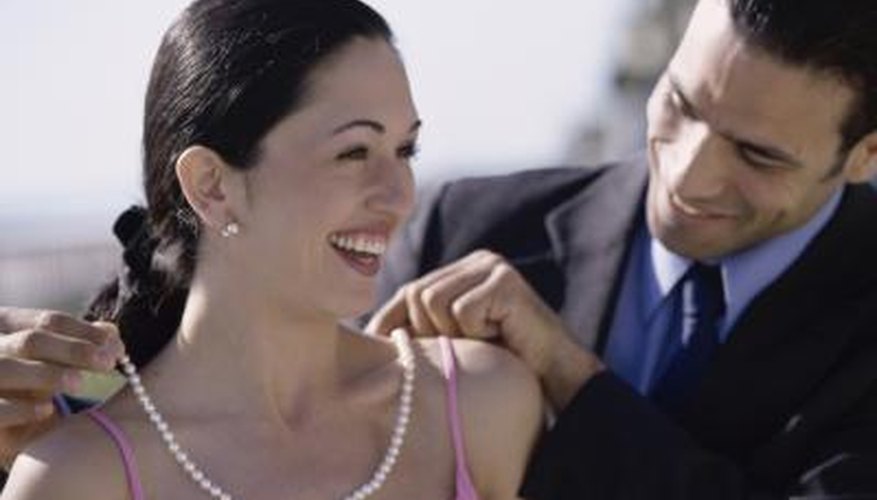 A Greek lavalier is said to be a level of commitment that will lead to engagement and marriage.

A Greek lavalier is a pendant necklace whose name is derived from the Duchess Louise de La Valliere, a mistress of King Louis XIV. Popular in the American Greek system, today the lavalier is given as a sign of commitment and affection from a member of a fraternity to his girlfriend. More than a necklace, the Greek lavalier is often a predictor for more significant relationship milestones to come.

Not typically familiar or popular outside of the United States, fraternities and sororities make up much of the typical American university fabric. These social organizations whose names are derived from Latin and Greek letters are deeply rooted in history and tradition. It is these customs that continue to perpetuate the act of Greek lavaliering between fraternity brothers and sorority sisters; a tradition that has withstood the test of time on many college campuses across the nation.

The Greek lavalier today is a necklace given by a fraternity member to his collegiate girlfriend, who is likely a member of a female sorority. This act is said to precede engagement and then finally marriage. The Greek lavalier represents the male's commitment, love and devotion to not only his significant other, but also to his fraternity and his brothers. Certain fraternities throughout the United States host lavalier ceremonies to present the female with the Greek lavalier.

A fraternity's Greek lavalier medallions feature the fraternity's letters. American fraternities who participate in the act of lavaliering their sweethearts include Sigma Chi, Kappa Sigma, Phi Delta Theta, Sigma Alpha Epsilon, and Beta Chi, to name a few. The Greek letter pendant is hung from a sterling silver necklace chain. The length of the necklace typically rests along the breastbone. Most fraternity brothers wishing to lavalier their significant others can order their lavalier pendant through their national fraternity directly.

The Act of Being Lavaliered

Before a woman is lavaliered by her fraternity man, she is often "pinned." Pinning happens when male and female collegians in the Greek system begin dating. Once the relationship becomes more serious, he will then give her a lavalier necklace. It is a significant moment when a fraternity brother's sweetheart is lavaliered, and he often gives her this token of his affection in very romantic ways, such as a special holiday gift or surprise.

Once a young woman has been given a Greek lavalier by her fraternity beau, it is often predicted that the two will become engaged shortly thereafter. If the woman is in a sorority, she will keep her lavaliering a secret until her Greek chapter hosts a candle ceremony. The women will pass a candle around in a circle while singing a traditional song and only the woman who has been lavaliered may blow it out in celebration of this milestone.

Quinn Collins is a marketing manager for a global commercial real estate firm. Since 2007, Collins has published work on websites such as About.com and LIVESTRONG.COM, and creates nationally distributed market reports for her firm. Collins holds a Bachelor of Arts in communication and psychology from Denison University.