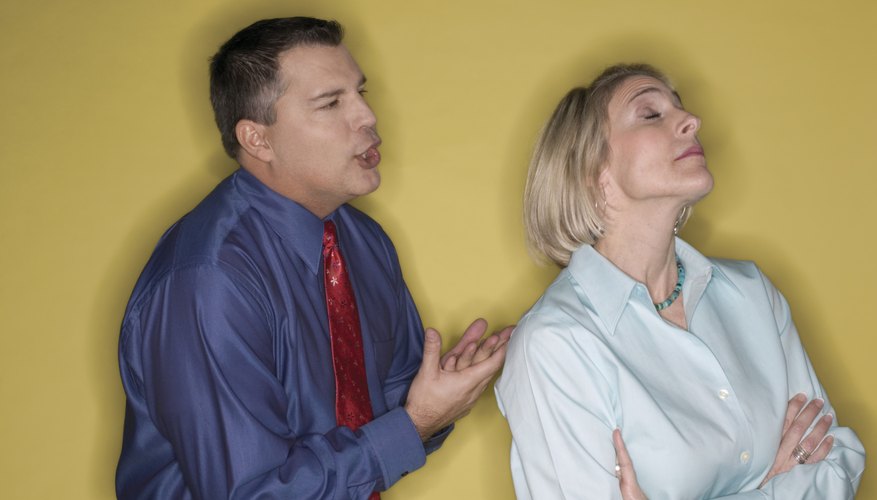 According to Dianne Schilling of Women's Media, avoidance is one of the most common strategies for coping with conflict or potential conflict.

Perhaps the biggest reason people avoid confrontation is rooted in a fear of failure. If involved in a romantic relationship, the person might be afraid that confrontation will result in the loss of the relationship. Others are concerned about not getting their point across and failing in that aspect. Many people are afraid of rejection and emotional pain and feel that avoiding confrontation is the best way to avoid these hurtful feelings.

Fear of Others' Perceptions

Most people would like to be seen as a nice person. This desire keeps some from confronting people because it could cause others to see them in a negative light. Fear of being perceived as selfish might be the reason for some people's avoidance of a conflict. Society often rewards people for having alternative responses to conflict. When a person addresses a conflict, he can be labeled by society as confrontational and difficult to get along with.

Confrontation and conflict are necessary components of a mature and intimate relationship. Therefore, a person who avoids confrontation is also keeping herself from true intimacy. If a person is afraid of intimacy, she might not want to express her true desires and needs by confronting her significant other. Instead, she hides her feelings because of a fear of becoming too close to the other person and letting that person into her head.

Shana Young has been writing since 1998. She has experience writing about relationships and psychology. Young holds a B.S. in psychology from Southern Illinois University and is currently pursuing an M.A. in teaching.