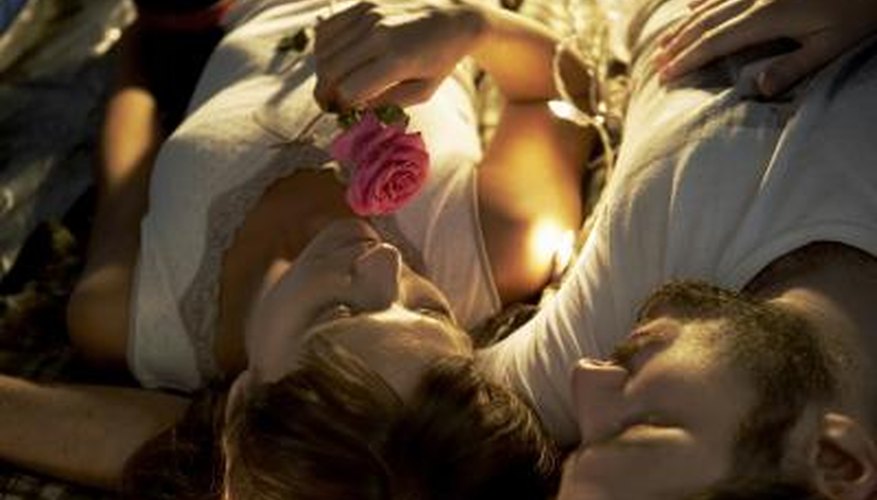 An overhead view of a woman smelling a rose while snuggling with her romantic boyfriend.

All too often, red flags are ignored or denied instead of being put to good use. When properly heeded, red flags can offer as much opportunity as they do warning. Choosing to confront and resolve these common relationship red flags provides vital opportunities for developing the interpersonal skills essential to building and maintaining healthy, satisfying relationships.

Immediately All About You

Love at first sight and whirlwind courtships are the stuff of fairy tales and romance novels. True intimacy develops over time. Pressure to quickly move to an exclusive relationship should be seen as a red flag, according to the Utah State University Extension. This pattern of behavior is recognized as an "early warning sign" of the potential for a future abusive relationship, warns family violence expert Dr. Steven Stosny.

Intense jealousy is the classic mark of an abusive partner. Some people misinterpret jealousy and possessiveness as being signs of love, explains marriage and family therapist Susan Hartman Brenizer. Extreme jealousy is also often accompanied by double standards of behavior, another red flag. One partner may be expected to follow a set rules that the other doesn't adhere to, such as not having friends of the opposite sex or not staying out all night.

Firm belief in strict, hierarchical gender roles with the expectation of male dominance and female submission is associated with a higher risk of future domestic abuse, according to the World Health Organization. The National Council on Child Abuse and Family Violence points to negative beliefs about women as a group as another risk factor. Expressions of a general distrust of women, statements describing most or all women in derogatory terms, and speaking of women as being intellectually or morally inferior are red flag worthy negative beliefs. These sorts of gender attitudes are often used to justify controlling behavior, another red flag. Controlling behavior includes keeping a tight rein on household money, isolating a partner from family and friends, and dominating a partner's personal choices, such as what to wear or whether to work or go to school, according to the National Domestic Violence Hotline.

Another important relationship red flag is ongoing exposure to abuse or violence during childhood. Experiencing abuse as a child and seeing incidents of domestic violence occur between parents while growing up are associated with a higher risk of family violence as an adult, according to the World Health Organization. The National Council on Child Abuse and Family Violence describes witnessing family violence during childhood as “the most common risk factor” for becoming an abuser. Growing up in a climate of violence can result in a lack of the social skills necessary to build healthy relationships and manage conflict in productive ways. It can lead to an acceptance of intimidation and violence as legitimate tools for managing relationships and resolving conflict.

Sharon Secor began writing professionally in 1999, while attending Empire State University. Secor specializes primarily in personal finance and economics, and writes on a broad range of subjects. She is published in numerous online and print publications, including Freedom's Phoenix, the ObscentiyCrimes and the American Chronicle.