How to Tell if a Guy Really Does Like You 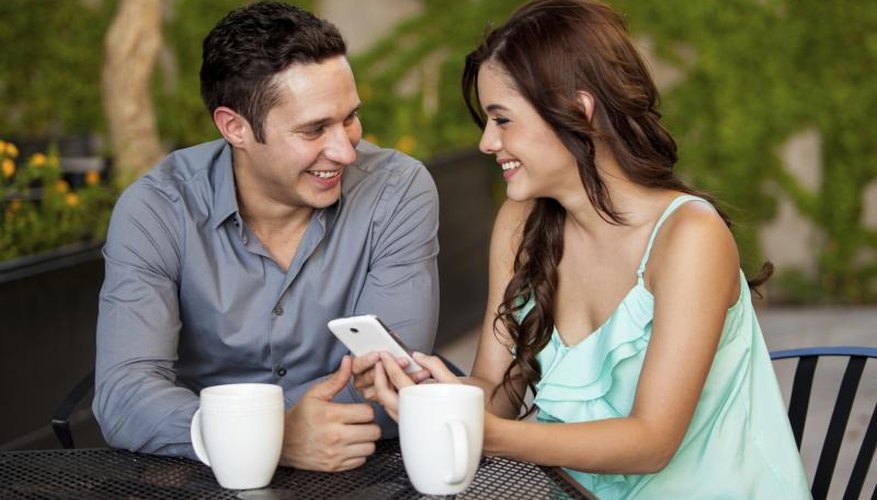 He playfully puts his arm around you, he flirts and he asked you to "hang out." While it appears that he likes you, his intentions don't seem definite. Instead of staying stuck in the, "Does he really like me?" limbo, take a closer look at the signs that he's giving off. Even though he may not outright say that he's into you, a guy's body language, facial gestures, subtle signals and attitude provide clues to his true intentions.

Use your funny bone. Laughing at your jokes and accepting your attempts at humor is often a sign that someone likes you, according to associate professor of psychology Norman Li in his article "Want to Know If Someone Likes You?" on the Psychology Today website. If he seems to giggle with glee when you playfully flirt with him, he may have a real interest. On the other hand, if he rolls his eyes or grimaces at your jokes he may not be into you.

Focus on his eyes. Holding a constant gaze is a sign that he likes you, according to behavioral scientist and dating expert Christie Hartman on her website. If he has an interest in you, he'll look you in the eyes directly. You may also notice him looking at you -- or checking you out -- even when you aren't looking at him. This is a signal that he likes you, or at the very least is attracted to you.

Ask yourself if he shows up where you are. If he seems to run into you when you're out or just happens to be studying in the same part of the library as you, he may have an interest. Keep in mind that this is different than stalking. Moving from across the bar to where you and your friends are to be near you isn't the same as following you everywhere that you go.

Look for nervousness or fidgety behavior, suggests Hartman. Nervousness is often a an initial sign of attraction. If he's wringing his hands or shuffling his feet and seems excited or anticipatory, his nervousness is a clue that he's into you.

Review how much effort he puts into you and your relationship. Guys tend to show their interest or loving intent through actions, according to licensed psychologist Daniel J. Tomasulo on the Psych Central website. If he seems like he's just going through the motions, he may not feel strongly about you. If he makes a point of seeing you even though he's had a busy day or rearranges his weekend so that he can accompany you to your family reunion, he has a real interest.

Pay attention to where his eye does or doesn't wander. Even though it's perfectly normal for a guy to take a glance at another attractive face, when he truly likes you he won't feel the need to search for someone else. He won't date other people or stray from you if he's into you in a deep -- and committed -- way.